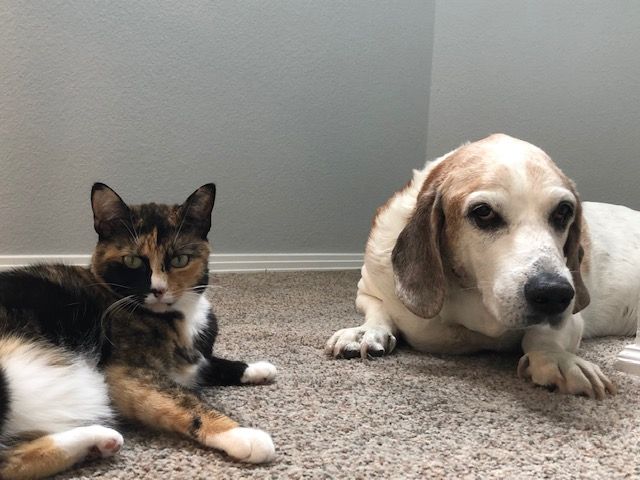 I live in a veritable menagerie of animal and child chaos. Now, we’re down by one basset just this last year and it’s been more quiet without our Bailey girl, but her brother still manages a good ugly face when the cat garners more attention than he thinks she should. Yet she keeps insisting that he enjoys her arching-cat rub beneath his saggy jowls, calico tail flicking into his cataract plagued eyes.

Until he sees us watching.

Then he’s all bark and tiny overbite snaps at the air above her.

But we know better.

It got me thinking about conflict and what makes it work in our novels and stories.

We all know the basics of conflict as it pertains to our writing. That it needs to be between our main character and some other source (i.e. a person, technology, the weather, the government, their past etc.). That it drives the character to escape, succeed, fail, run (to or from) all important story climax points that keep the reader engaged.

But when I think of this kind of conflict, I think about writing romance.

Ok, look away and or stop reading if you think this has nothing to do with your historical fiction on the Prussian War…but I’ve only got a few more words left and it may give you a little insight.

Sometimes the conflict comes in the not wanting to want what we want. It comes when two characters rub each other the wrong way, precisely because it’s kind of the right way and they both hate admitting it. Two characters (leads in your story, no matter what their gender or sexual orientation) who get riled up by the other are usually, in some way, riled up about how much they don’t hate them despite knowing they should.

One of the best examples of this is Kat’s final speech in 10 Things I Hate About You. (I GET that its from a teenage snippy version of ‘Taming The Shrew’ but bear with me because that movie is actually quite brilliant and the principal is a romance novelist who spends a great deal of the movie looking for synonyms to the word “penis”).

It is a play on the beloved Shakespearean 141st Sonnet, beginning with “In faith, I do not love thee with mine eyes…” and underscores this principle of why not wanting to love someone can be the most powerful motivator of behavior and conflict.

It’s in the breaching of walls, the naked vulnerability, and the human exposition that binds us as readers to the character, and makes us fall just as hard as they do.

You may not have swooning shirtless people with wind machines in the background, mussing their perfectly golden locks, while they embrace ecstatically, but I bet that you have a character that you want your reader to root for. And that means creating conflict that resonates with the deeper tendrils of human emotion hidden beneath the layers of caustic comebacks and snide remarks.

Your conflict doesn’t have to drive your character into the arms of their reluctant beloved, it just has to drive them into the hungry hands of your readers.